Coach Allen: I'll give you a little injury update as far as today; I'm not going to go through everyobody that I've already talked about but I will say Tyvon Branch had a little back spasm today so we held him out, DHB [Darrius Heyward-Bey] went into today with a knee, Zach Hurd has a head, and Brandon Myers a shoulder.

Q: With [Richard] Seymour it's been about four days now; is that more of a concern than you thought it was?

Coach Allen: No, I don't think it's really more of a concern. He's a guy that's an older player that's going to need some rest here in camp. He has kind of gone through the same process for the last few years so it's not really a concern. He's still not really where we want him to be yet but I really don't anticipate that being a huge issue.

Q: Are any of these [injuries] concerning to you? Are they minor or are they possibly more than that?

Coach Allen: Well I don't think any of them are real serious injuries but we'll see as we go along. Brandon Myers was probably the one that we'll see.

Q: What's the prognosis on Goodson? He's out here today at least…

Coach Allen: He's out here, he's able to be moving around. He's still pretty sore so we're just going to see how he is day-to-day, but I don't know, we'll see.

Q: Where is Aaron Curry at right now with his rehab?

Q: He tweeted out something saying thank you to Reggie McKenzie and yourself and it kind of grew into a lot of people speculating about what might've happened.

Coach Allen: Nothing more than the fact we're letting him go down there and see the specialist in L.A.

Q: Has he hit a wall in his rehab?

Coach Allen: He's just not quite where we want him to be. We're going to go down and basically let him get a second opinion and see if we can't do something to get him better.

Q: With a non-padded practice and then a day off I would assume you would hope that you would get tempo, crispness; did you get everything you wanted out of practice today?

Coach Allen: No, it wasn't what we expected. I thought our focus wasn't there, I didn't think the tempo was there. I thought the guys tried to battle through, but we have to practice better with less mistakes than we did today.

Coach Allen: I think the guys are trying but that's all part of that mental toughness that we talk about and our ability to focus in and block out the distractions, whether it be the heat, whether it be the fact that you're tired, whatever the case may be. We have a job to do and we have to execute better when we come out here tomorrow.

Q: [Mike] Mitchell is a guy that has always played with enthusiasm sometimes to the point where it gets him in trouble. I'm curious of what your observations have been of him?

Coach Allen: He's competing. At the end of the day you look for guys when you walk off the practice field or look at the practice tape you see something and say, 'hey the guy made a play today.' He's done that a couple times this camp. I think I'm pleased where he's at. I want to continue to see progress from him. I'm looking forward to watching him play against somebody else and see how he does.

Q: Is he living up to the body language you want your players to have?

Coach Allen: Yeah. He's out there competing the way we want him to compete so I'm pleased with that.

Q: You said Pat Lee earned a moved up a little bit and get a look. How's he looked since you did that?

Coach Allen: No different, really the same. I think he's done a good job and progressed. He's gotten better as we've gone through camp. He didn't look out of place when stepped up and he got a chance to go against a little better competition.

Q: Any closer on how many reps the first team will get on Monday?

Coach Allen: No, we kind of have an idea of how much they will play. But like I tell the players, you got to get ready to play. We'll make the decision on how long it is that you play. I'm really going to keep that decision between me and the coaching staff because I want our players to focus on going out there and playing, not worrying about how many reps they are going to get.

Q: So you won't tell them until Monday before the game?

Coach Allen: I won't tell them until they play the game and I tell them they are coming out. Because there is only one way you can play the game and that's getting your mind right to go out and compete. That's what I want those guys to do regardless if they are ones, twos, or threes. I think a lot of times when you tell them, 'hey you are going to play one quarter or 10 snaps,' there's a little bit of a mental let down and I don't want that.

Q: Jacoby [Ford] just kind of dabbled with punt returns since his senior year at Clemson. As he's fielding them every day do you see a lot of progress?

Q: How different of an animal is punt returns compared to kickoff returns?

Coach Allen: Totally different. The flight of the ball, you have got to be able to tell whether the ball is going to turn over or if it is going to go end over end. It is a lot more difficult to catch punts than it is to catch kickoffs.

Q: Is there any position battle that is more intriguing going into the pre season game?

Coach Allen: I am watching them all. They are all intriguing battles. I think until we start playing some real games and really see live action, that is when we will really know who is going to be able to step up and who is not.

Q: What is the most place kicks you have seen hit the crossbar in a single day?

Coach Allen: I don't know how many it is, but I think it happened today.

Q: How do you balance preseason performance in games and practice as far as performance goes?

Coach Allen: The evaluation process is not a piece by piece process. You take in the sum of all the parts. We obviously evaluate practice, but when the lights come on and you play the game that is when you have to be able to step up and make plays. Obviously, we will put a higher weight on game day and our production on game day then we do practice. 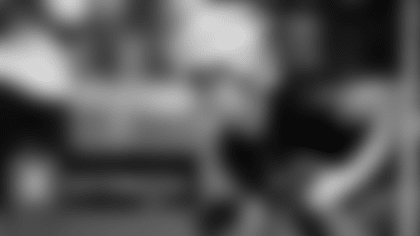 'I wouldn't change a thing': The path that led to Jarrett Stidham competing in Raiders' quarterback room

The quarterback was "thrilled" when he realized he would be traded to the Silver and Black and be back around some familiar faces.

Here are a few observations from the Raiders' first practice since their victory in the Hall of Fame Game.

'You never know if you'll get this opportunity again. I really savored it,' the head coach said after securing his first preseason victory with the Silver and Black.

The rookie running back was a standout in the Raiders' 27-11 victory over the Jacksonville Jaguars.

Halftime Report: Raiders backfield getting the job done in Canton

The Silver and Black lead the Jaguars, 20-0, at halftime in the Pro Football Hall of Fame Game.

'This is legendary': Raiders journey into the past during Pro Football Hall of Fame tour

The Las Vegas Raiders toured the Hall the day before suiting up for their first preseason game.

Looking to earn a spot in the trenches, Lester Cotton Sr. is making the most of his opportunity

The guard is looking to close 'that revolving door' he's gone through with the Raiders.

Depth charts are required to be released ahead of preseason matchups, and it's important to remember changes are fluid and at the coaches' discretion.

Here are a few observations from the Raiders' last open practice before heading to Canton, Ohio.

'I played all my games in this stadium': Josh McDaniels returning to a familiar field for the Pro Football Hall of Fame Game

Josh McDaniels will coach his first game at the helm of the Raiders in his former high school stadium this Thursday.